We knew Jean-Jacques Karpff as portraitist in drawings and miniatures.
The recently expanded Unter-Linden Museum in Colmar offers a unique platform for nearly 80 works from various collections of the city’s native artist. Reflection of a work relatively little prolix in quantity and largely unknown today, evolving between neoclassicism and romanticism, between fine arts and applied arts.
The phenomenon of the miniature is very popular in the market places of Paris and London art for thirty years.

A themed exhibition where we advance in time so his contribution with the Decorative Arts, and a final part on the physiognomy of the adornment of male and female costumes. An epilogue proposed in an adjacent space of contemporary artists attracted by the work of the miniature, especially porcelain.

A workshop of the miniaturist painter Jean-Baptiste Jacques Augustin illustrates the typical work tool for a miniaturist. It is presented with its rack-and-pinion desk, its indispensable binocular loupe, its often ivory support and its set of pigment variations that will brighten these works focused on detail. Sayings of his other contemporaries are also presented such as Pierre-Louis Bouvier, Jean-Baptiste Isabey, Louis-Léopold Bailly or Jean-Baptiste-Jacques Augustin. The artistic situation of Colmar before the Revolution is presented in the introduction.
It is a viticultural and agricultural city of 13,000 inhabitants, which opens quickly to the industry of the Indianization. After the end of the prohibition of printed fabrics in France (1759), Alsatian manufactures developed thanks to the support of the Swiss and German financial centers.
Lacking local artists, they appeal to cartoonists and writers from elsewhere: this is how the Parisian artists Bonaventure Lebert and Philippe de Saint-Quentin, established in Colmar, will play a determining role
in the artistic apprenticeship of young Karpff, put in touch at a young age by miniaturism. A typical example of Indian “Views and sites of the Valley of Munster in Alsace” by Karpff and Lebert, printed by Haussmann and is not, once is not custom, a miniature because it is an assembly of 10 pieces for a surface of 199 x 237 cm while the average dimensions of a miniature are 30 x 20 cm (Photo credit: Unter-Linden Museum).

A course that had a first period in Paris as a student after receiving training in Paris from Jacques-Louis David until the end of 1793, he also considered that “we could not
push further the art of drawing. It is thanks to this spawn of the Arts that he will try himself to the academic nude (says the “academies”) and who will have like nickname near his comrades nickname of “Casimir”, pseudonym by which he will sign some of his works . This first Parisian was held under good hospices for young Jean-Jacques since it will have the privilege of being hosted by the Count of Narbonne-Lara in the Palace of Luxembourg. A comparison of drawings of this post-revolutionary era with this example of academy by Anne-Louis Girodet, “Academy of Seated Man” (1793) / the drawing “The freedom crowning the people” of Karpff (1794) (Photo credits : Unter-Linden Museum).

Back in Colmar between 1793 and 1806, he became a citizen artist since he contributed to artistic works to the glory of this nascent republic and where he taught in the Central School of Colmar which emerge a few students who made a career in Art including a cantor of Alsatian lithography Martin Rossbach or Jean-Etienne Decker, established later in Austria.

During his Alsatian period, Karpff also devotes himself to portraits drawn and often enhanced with gouache.
This talent for portraiture assures him a regional fame which offers him the opportunity to meet the Empress Josephine in Strasbourg in 1805, to whom will be commissioned a portrait which knew several retouches before being presented at the Paris Salon of 1808 and who will have a pretext for a return to Paris where he will remain until the end of his life, after establishing himself at the poetess Victoire de Babois.
Instead, he will strive to focus on his miniaturist career representing elements of nuclear family and focusing particularly on the physiognomic details of these characters will push to the extreme accuracy in the expression of the face his models, symbol of a feat worthy of a goldsmith at the sight of the already narrow dimensions of his achievements.

It contains portraits in Indian ink representing the family of Reiset, one of the largest sponsors of the artist, precursor in the field of streaking. Symbolic miniatures of the Parisian climax of Karpff representing the Reiset Children (1818) / “Portrait of a woman in the veil” (1815) (Photo credits: Unter-Linden Museum). A beautiful evolution in the rendering of the artist’s facial expression between Karpff and his Pastel Self-Portrait (1793 or 1794) / “Portrait of Dr. Morel” (1799) / “Portrait of a man of three quarters to the right”, one of the most expressive portraits painted by Karpff, where the technique of streaking is present (around 1800-1810) (Photo credit: Unter-Linden Museum).

Karpff and the myth of Ossian
The themes of inspiration evolve and the mythological subjects take a place of choice in the miniatures of Karpff. The artist falls under the spell of the epic Ossian, Scottish bard of the 3rd century, who is the author of Gaelic poems, translated and published for the first time by James Macpherson between 1760 and 1763. The poems of Ossian exalt the sublime purity of nature, a primitive and northern antiquity whose novelty seduces many followers of David. www.musee-unterlinden.com
Jean-Jacques Karpff – “Aim for the sublime”
From March 18 to June 19, 2017 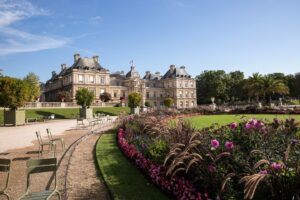