Just awarded by the Molière prize of the best comedy 2018, “Le gros diamant du Prince Ludwig” (originally untitled “The Comedy About A Bank Robbery”) is like a movie in Le Palace Theater! 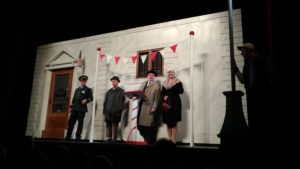 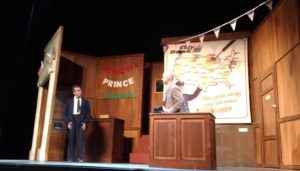 A real trip to the United States of America, back in the 50’s, with effects and stunts worthy of Hollywood. You will leave the Palace with your head upside down! (photo credits: Alexandre Plateaux). 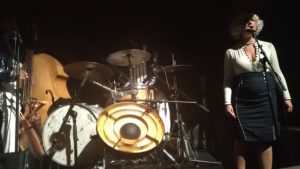 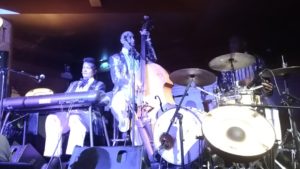 Eleven excited actors, thirty costumes and six impressive sets unfold before your eyes, all on a rockabilly soundtrack played live by an orchestra. An artwork adapted by the same team of the “Faux British” theater play, also awarded by the Molière prize of the best comedy in 2016. 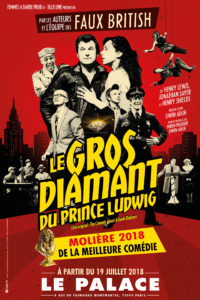 A ROBBING OF A BANK HELD BY REAL BROKEN ARMS TEAM.
It’s the America of the Fifties, with live musicians, not-so-well-behaved mountevers, fugitives on the run, a too honest pickpocket, a little faithful lover, pigeon lovers, a stupid thug, an angry banker, a show-off policeman, a broody hen mother who smolder other people in the play, and Warren Slack, the oldest trainee of the US.

HUGE FILMMAKING REFERENCES…
“Le gros diamant du Prince Ludwig”, a piece where we love each other as in “Let’s sing in the rain”, you shudder like in a Tarantino creation, you hold our breath with stunts like in the Ocean’s Eleven movie, with the actors hung on a cable and you could laugh like in a Marx Brothers film. Another scene hung into emptiness, shaping a 4D.

The best of a Hollywood movie transposed to a theater in Paris, now in Le Palace, famous for hosting a disco club in the 80s, like the new-yorker Studio 54 club. Here are starred the funny Bonnie & Clyde, Mitch Ruscitti and his lover Caprice Troisgros, and the not least honest Marilyn Monaghan, a City Bank associate (photo credits: Christophe Raynaud De Lage).

The audience experiment a cinematic and euphoric journey! A travesty between a boulevard theater and a comedy cartoon, like show those two pictures in action, where the image and the framework takes a huge part in the story (photo credits: Christophe Raynaud De Lage).

This adaptation of the successful british comedy “The Comedy About A Bank Robbery” is staged and the fruit of the french adaptation in Paris of Gwen Aduh, whose scene is often imbued with strangeness and paranormal. In addition, strongly influenced by the British scene, including Monty Python, he teamed up with Miren Pradier to adapt two successes from the other side, including the 2016 Molière “Faux British”, originally titled “The Play That Goes Wrong “, the artwork of the London housemates trio Lewis, Sayer and Shields, forming the Mischief Theater. This play was noticed by those two acolytes during their  applauded passage at the Fringe Festival in Edinburgh and in the West End district in London.

Thus, the staging style of Gwen Aduh is strongly based on books he read about shamanism and psychotropic substances that fed his previous shows like “Amanita Muscaria”, fairy tales, writings on the fairs phenomena and on the catacombs of Palermo which fed “Antiquithon”, collections of testimonies on the UFO phenomenon, Ufology books at the origin of “Partons Pour Pluton”, a section devoted to anatomical waxes,
of 19th century medicine and entomology books to make the strange “InSecta”, a great book about the theater of the “Grand Guignol of the Chaptal street” that has colored the universe of “Grand Frisson”. We also find, of course, the adventures of the Baron from Münchausen rowing there with other books about the western and DC comics heroes.
The comedian Jean-Marie Lecoq is hilarious in his role of the viril but awkward City Bank Director! (photo credits: Patrick Bosc).
From July 19th 2018, from THURSDAY to SATURDAY at 8 pm in Le Palace theater.
www.legrosdiamant.com 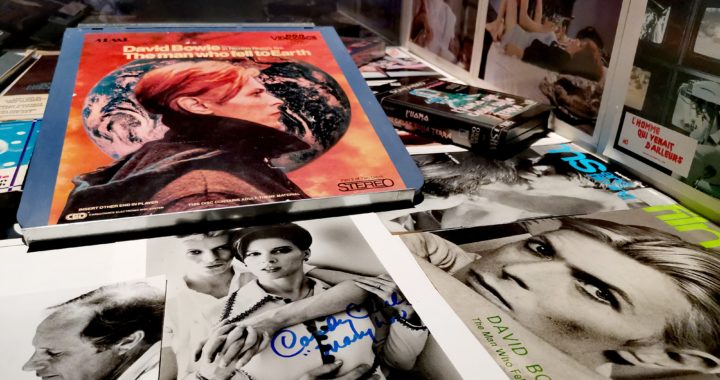 Are you a fan of David Bowie? Here’s his new exclusive Bowie Odyssée exhibition in Le Palace theater! 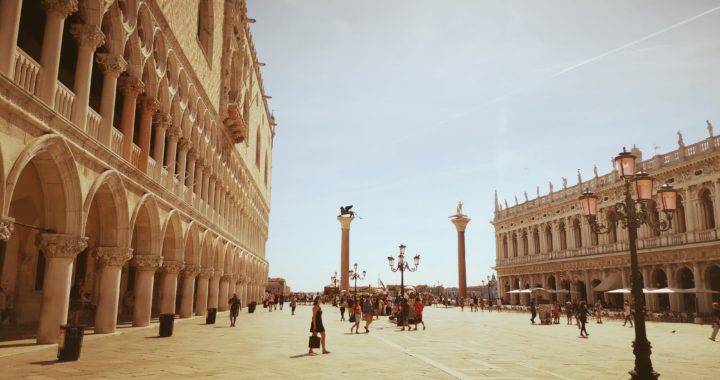 Meet Venice from inside… Its churches and legendary monuments, thanks to the Venezia Unica City Pass!