The legendary Champagne House Mumm reinvents its glorious past, within the RSRV label. This private and confidential selection of prestige Champagne makes a subtle allusion to this rich story, with a beveled corner. A reinvention for this legendary Champagne House, whose headquarters stand in Reims, from where we would have a visit to the cellars, open to the public. By Alex Plato

Produced in a limited quantity, the RSRV Blanc de Blancs may be distinguished by a bottle, adorned with a fine neck, allowing a slower evolution of the wine and a longer conservation.

The dressing of the bottle revisits one of the most beautiful legends of champagne… Indeed, in the 19th century, the Cuvée Mumm Cramant was delivered in person, accompanied by a business card. If the happy recipient was absent, the upper right corner of this label was folded down, a sign that one had come in person to pay his respects (Photo credits: Mumm).

That’s mainly why, this custom that the beveled corner of the main label is obviously alluded to. At the Maison Mumm, you know how to cultivate and take care of your story.

“The RSRV Blanc de Noirs is a powerful cuvée that reveals the strong personality of some Verzenay Pinot Noir. With its toasty brioche aromas, this champagne is released in the mouth with a long intensity.” Didier Mariotti – Cellar Manager of the Maison Mumm. 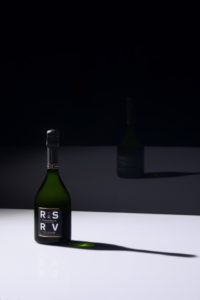 Indeed, Mumm has always reserved a selection of its best Grands Crus to family members and friends of the House. Today, you have the opportunity to become an ambassador of these exceptional champagnes, by joining the RSRV Circle, and you may participate in the expansion of this network of champagne and rare wine enthusiasts, by inviting friends and colleagues to discover this RSRV private cellar (photo credits: Mumm).

You can access there through a personalized ID and discover the selection of wines reserved for you, at preferential rates. In order to share these exclusive offers with your loved ones and make them discover the RSRV universe, the Maison Mumm proposes at your disposal some personalized cards, including the address of your private cellar.

Reserved for a privileged circle of friends of the Maison Mumm and produced in limited quantities, the RSRV Blanc de Blancs 2012 is a fresh and elegant vintage from the famous Cramant territory.

From their first order, your guests then become Friends of the House and consequently benefit of this access to their private winery and personalized business cards (photo credits: Mumm). 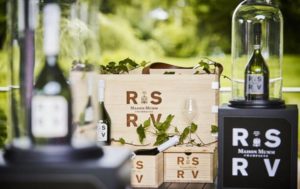 For the presentation of its new range, the Champagne House imagined a polished wooden case adorned with a leather strap containing six standing RSRV bottles. This box will certainly be diverted by some as a real object of decoration and by others in a nomadic box. The Maison Mumm is part of the Martell Mumm Perrier-Jouët group, a prestigious cognac and champagne division, owned by the Pernod Ricard group, the world No. 2 in wine and spirits branch. Strong of a heritage dating back to 1827, Mumm is now the first international Champagne House in France and the third in the World. Recognizable by its red ribbon inlaid in the bottle, the Cuvée Grand Cordon embodies the spirit of the House. 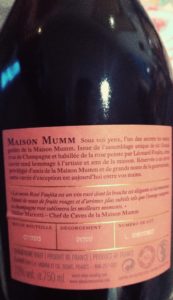 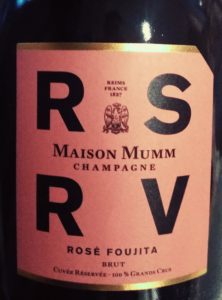 A blend of six Grands Crus, coming from different terroirs acquired by the Maison Mumm since 1840, the RSRV Rosé Foujita is decorated with the mythical pink color painted, for the House in 1957, by Léonard Foujita, a famous Japanese painter and friend of the Maison Mumm.

Cramant means “chalk mount”. From the minerality of this soil emanates the freshness of our Blanc de Blancs. This champagne is for those who are looking for this purity so difficult to reach. Incisive, his attack is frank, its fine bubbles and instant pleasure.” Didier Mariotti – Cellar Manager of the Maison Mumm (photo credits: Alex Plato).

“The Cuvée Rosé Foujita is a racy wine whose mouth is elegant and harmonious. Tinted with red fruits and more subtle aromas such as blood orange, this rosé champagne sublimate the best moments.” Didier Mariotti – Cellar Manager of the Maison Mumm (photo credits: Alex Plato).

This rosé packaging is strongly linked to the soft taste of this champagne, a balance symbolized in a way, by the positions of the letters on the bottle. Those character traits of this gourmet champagne make it ideal for any moment of the day. A Cuvée that befits this wine, while revealing aromas of strawberries stewed with a touch of acidity and fresh fruit, highlighted by a sweet finish of light sparkling fruit.

Be member of the RSRV Circle gives the privilege to the customers to benefit from preferential rates on exceptional champagnes from only Grands Crûs appellations and moreover not available to the general public.

Some words about Mumm history… The roots of the Von Mumm family, belonging to the Germanic 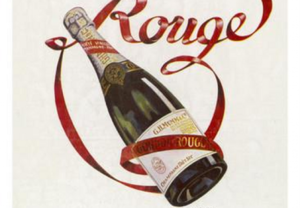 nobility, date back to the Middle Ages. But it’s only since the 18th century that champagne has been connected to wine. Thus, in 1761, Peter Arnold Mumm decided to start producing and selling wines in Cologne. He offered his passion to his sons Jacobus, Gottlieb and Philipp, who became also pioneers in this nascent champagne industry (photo credits: Mumm).

Crossing the border, they settled in Reims, and officially founded in 1827, this champagne, later baptized Mumm. In 1852, Georges Hermann Mumm, son of one of the founders, took over the destiny of the company G. H. Mumm et Cie. By the way, Georges Mumm was able to buy 218 hectares including 160 hectares, labelled in the Grand Cru zone.

Despite this large area, the House requires the juice of 600 additional acres from 800 independent winemakers. Moreover, by constituting the vineyard of the House, it achieved to lay its foundations on an excellence policy. An open-minded man and defender of social progress, he sets up prizes of virtue or bonuses of misfortune rewarding deserving workers because of their age or infirmity (Photo credits: Mumm).

In the wake of the founding fathers, he pushed the boundaries and travelled the world, from Europe to Oceania, to market his cuvées. From 1900, the House held already about twenty subsidiaries in major markets, such as the United States, Russia, Canada, but also Brazil and Peru. His greatest creation remained the famous Cordon Rouge label, created in 1875. It is still today the main quality symbol, of the Mumm signature. 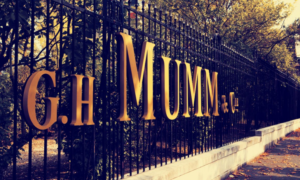 Nowadays, you have still the possibility to discover the ancestral Mumm headquarters and cellars, still located in Reims, in order to learn more about their identity and their process of production (photo credits: Alex Plato).

Since the first steps, straight after the handmade harvest (to avoid damaging the grain), the pressed juice, on the spot, arrives directly to the tank.
This follows the first fermentation (without adding sugar other than natural sugar) in stainless steel tanks, and since 1990, these tanks are open to allow carbon dioxide to escape.
These tanks which can be huge, containing some 500 000 bottles for some, bring together hundreds of musts from different sources.

Then, the second fermentation, with the addition of then starts in the cellars, directly situated under those Mumm headquarters, the cellars extend up to nearly 14 meters underground and nearly along 25 km, they were excavated between 1850 and 1908. Nevertheless, those are only a small portion among the 250km composing the entire labyrinth of champagne warehouse galleries, spreading under the city of Reims. Previously, the wine bottles were matured in wooden casks, until 1860. Then, they were transferred in tanks made of reinforced concrete, for more practical reasons.

Regarding the method, you would admire the additional steps, like the riddling of the bottles, necessary for the mixture of aromas. Formerly, this action was done by hand, a real know-how that was only learned after a 3 years tuition. Put on the desk, it took no less than 6 weeks and 25 actions to reach a position of 20 degrees from the bottle to 60 degrees. 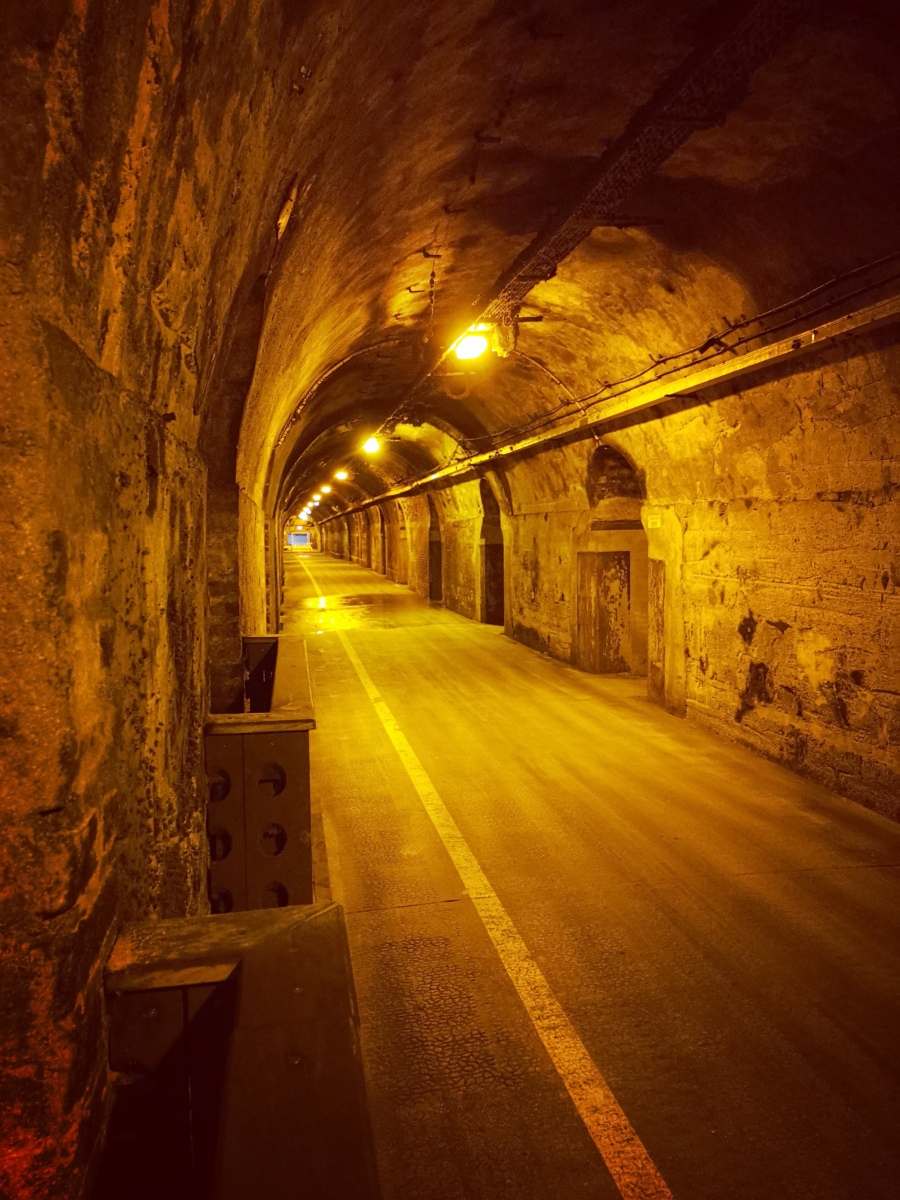 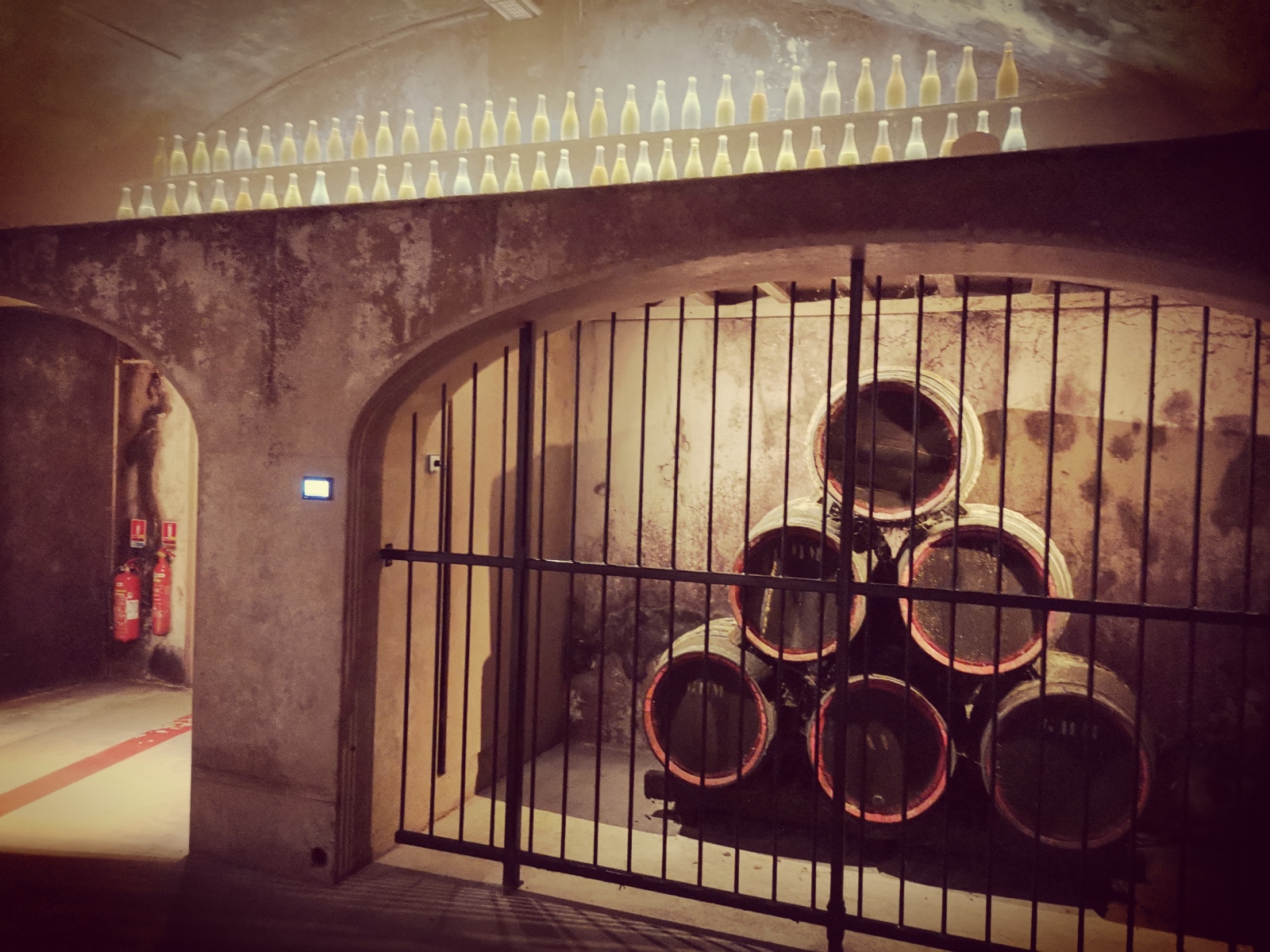 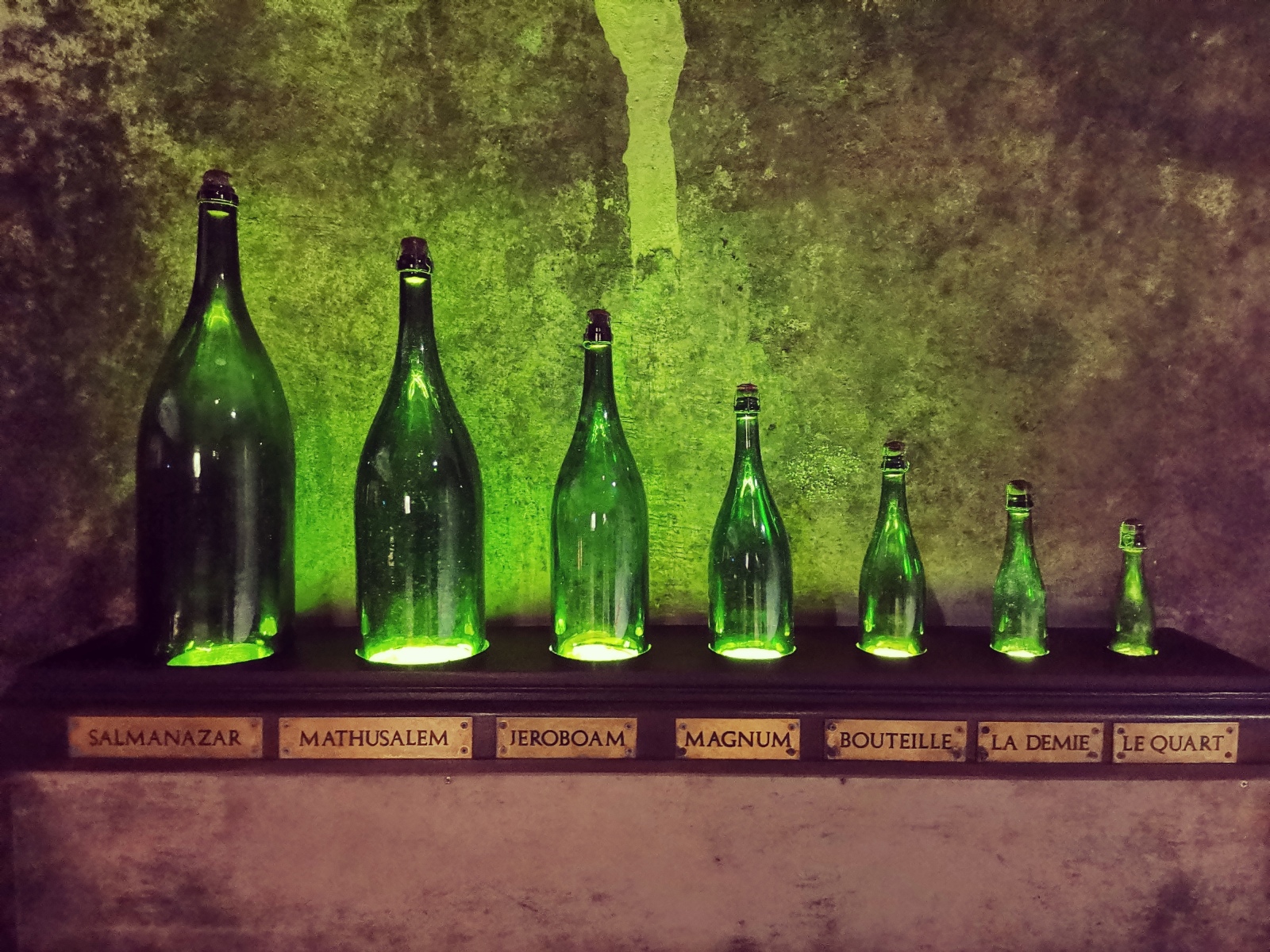 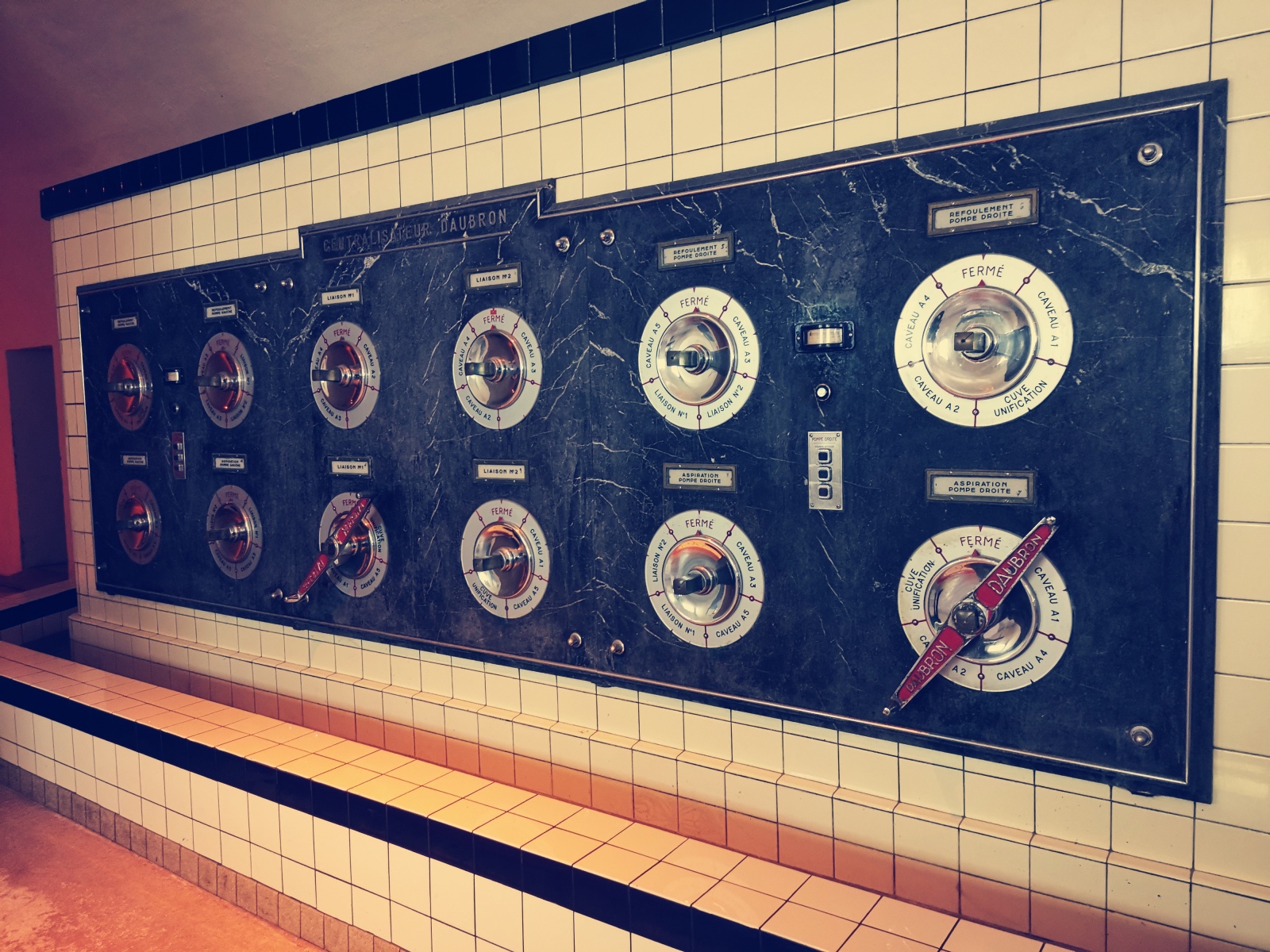 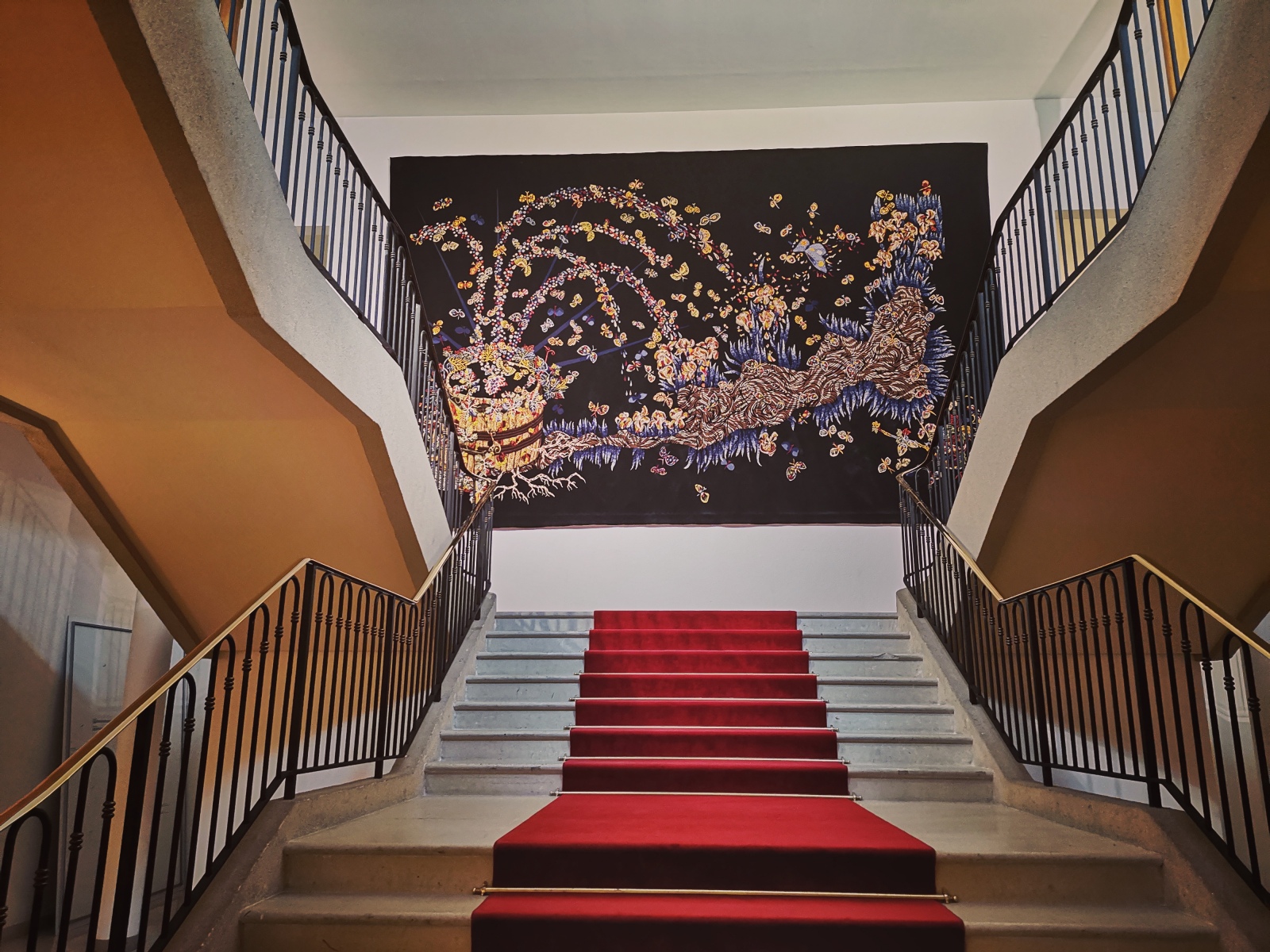 This action would eventually facilitate the disgorging stage, allowing the eviction of the bidule and its batch of natural deposits. For you information, the Champagne Mumm rosé brut is dosed at 6 grams of sugar per liter (comparing to the average dose for a Champagne Mumm brut is between 6 and 12 grams), and versus 40 grams for a Champagne demi-sec.

By the way, it remained during ages, an ancestral method, but tedious, that gave way to the happening of mechanization process, by means of gyropallets, able to stir thousands of bottles at the same time. By the way, you could discover at the end of the visit, a brilliant exhibition presenting some vintage vineyard equipment, like old ploughs or wine presses…

Although the law requires cellar aging of at least 15 months for non-vintage wines and 3 years for the vintage, Mumm bottles stay in the cellars between 10 and 20 years for a vintage, and between 3 and 5 years for a non-vintage, still depending on the quality of the cellar. For instance, you may count at least 10 years inside, for the Cuvée René Laloue, since this premium range is rare and fragmented, because it includes only the production of 12 parcels. 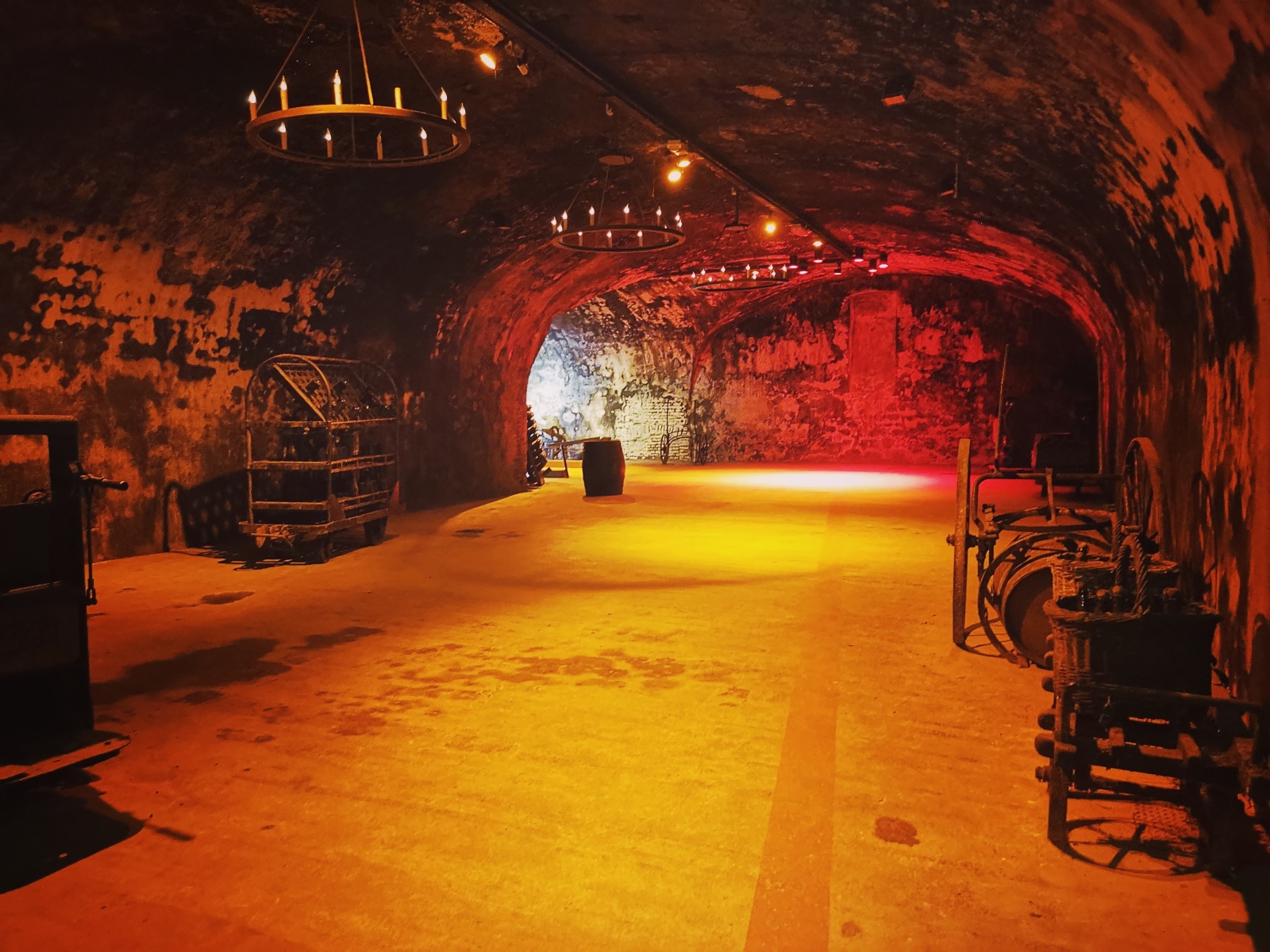 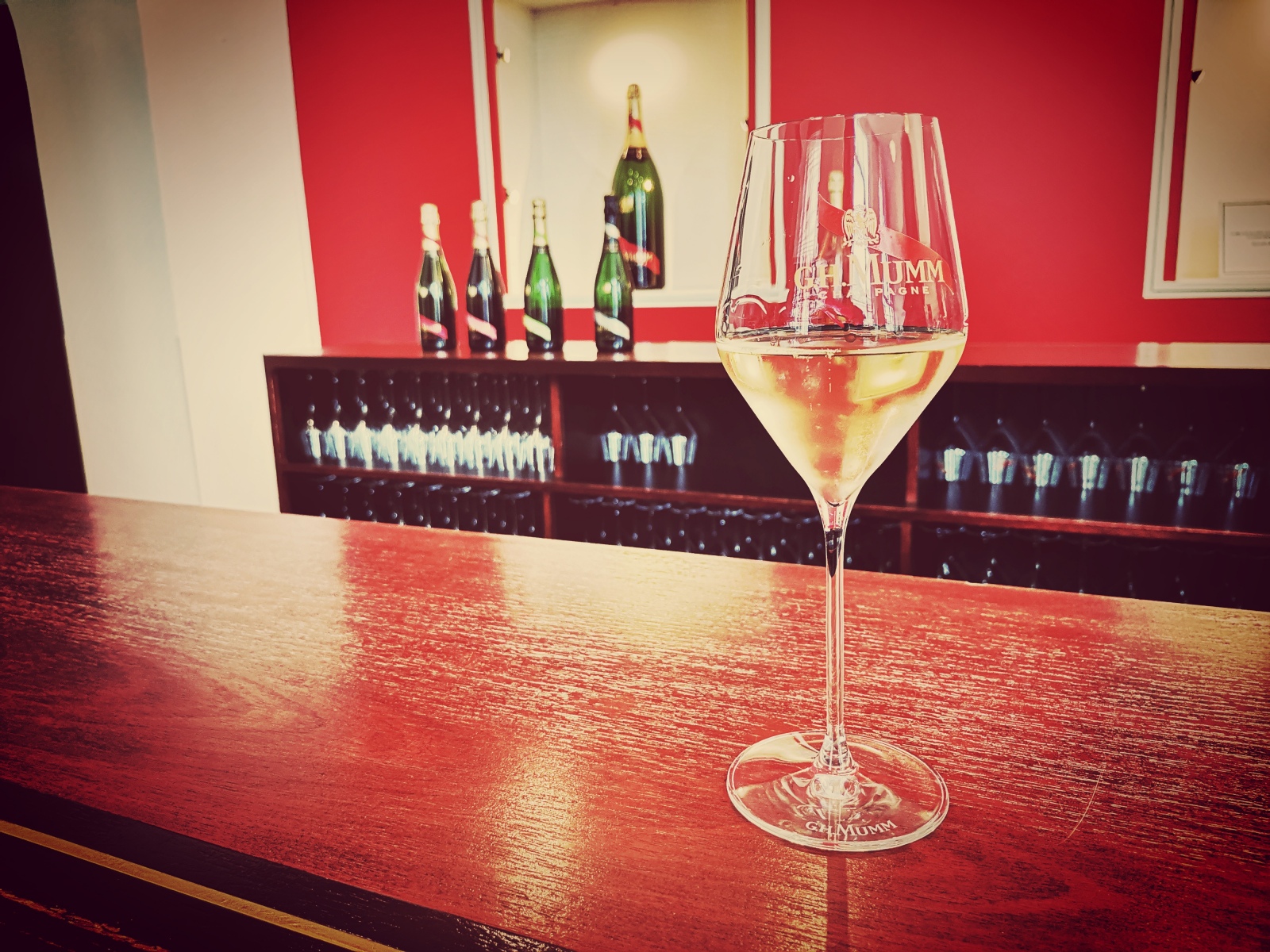 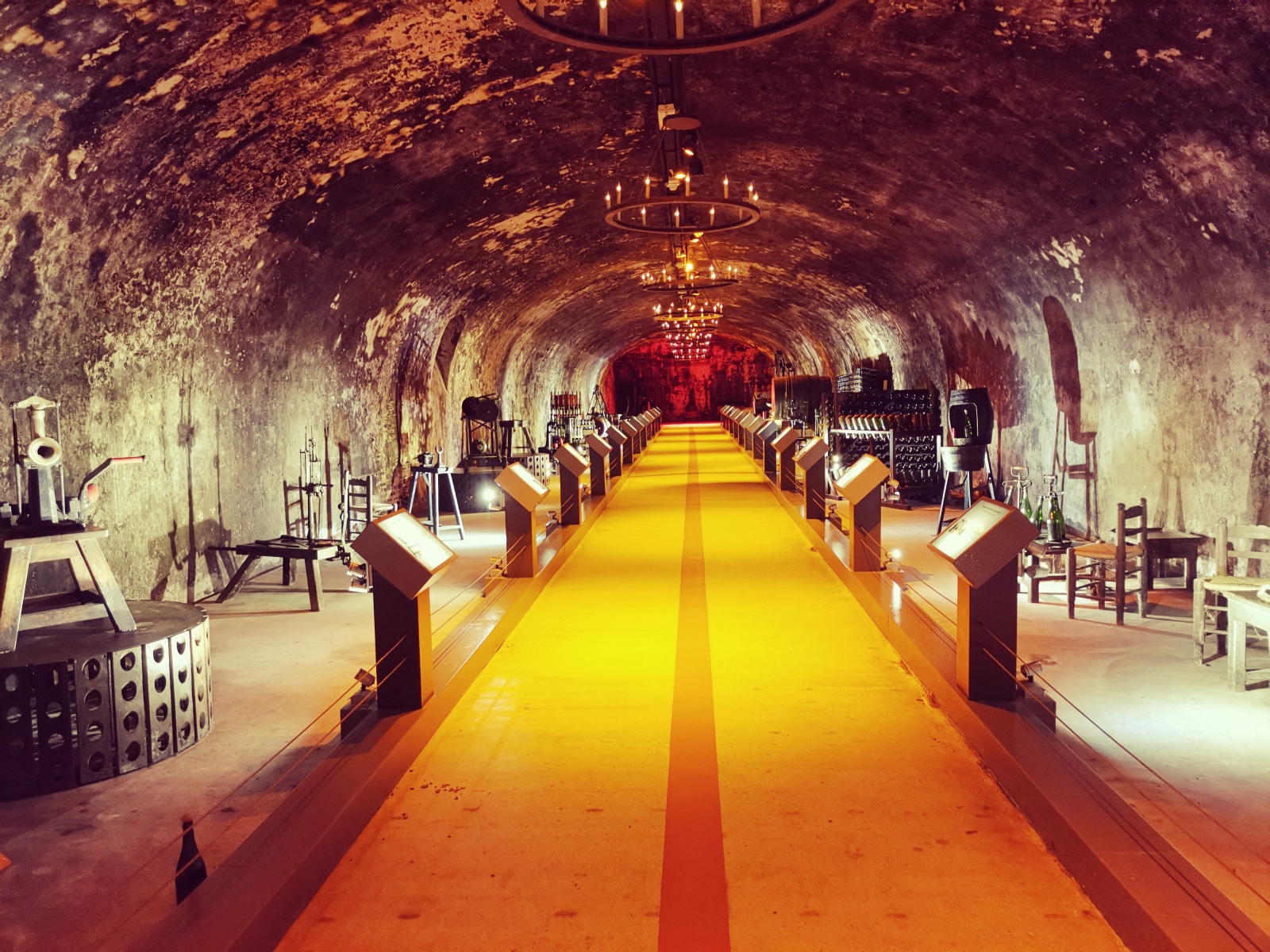 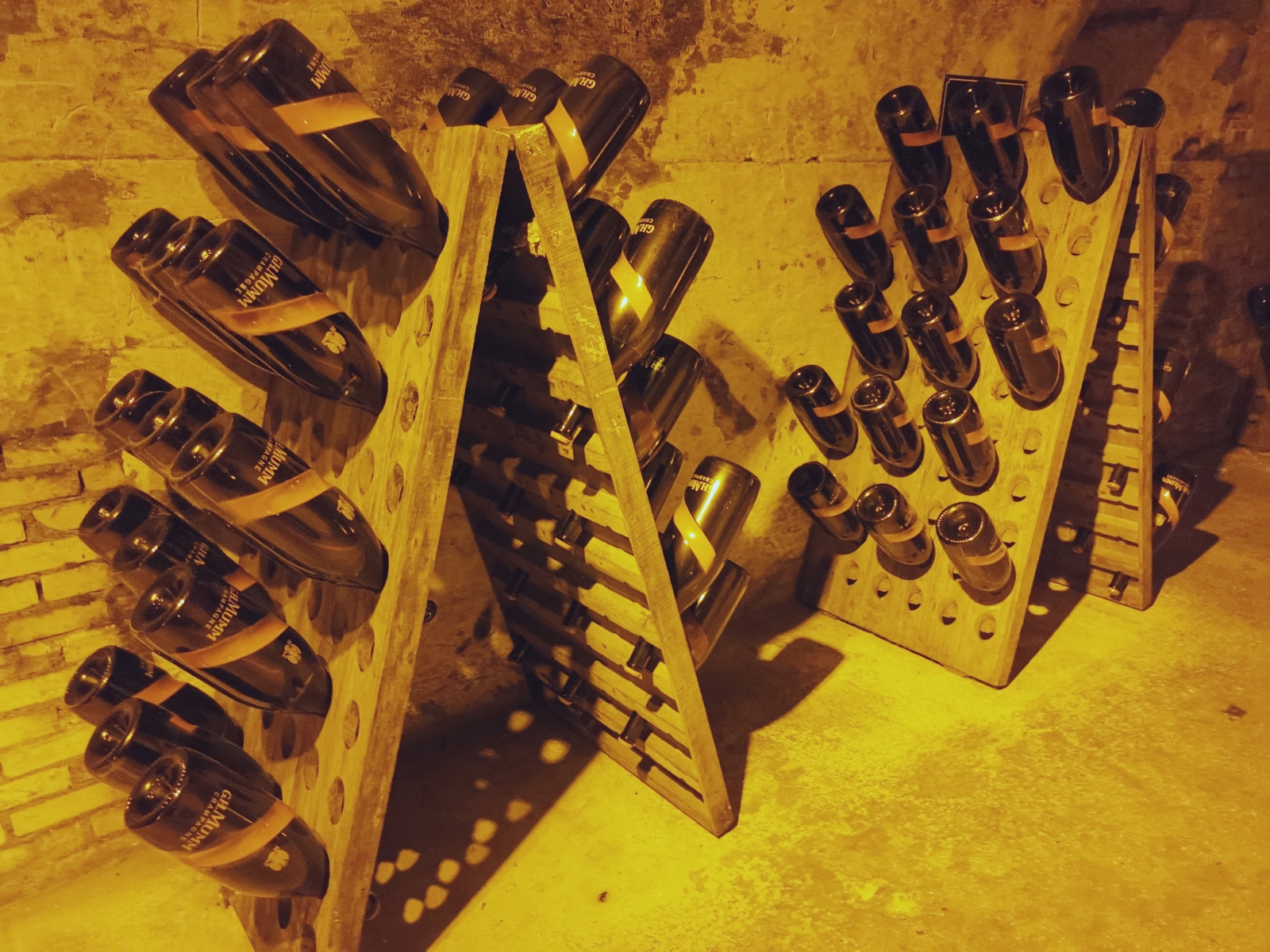 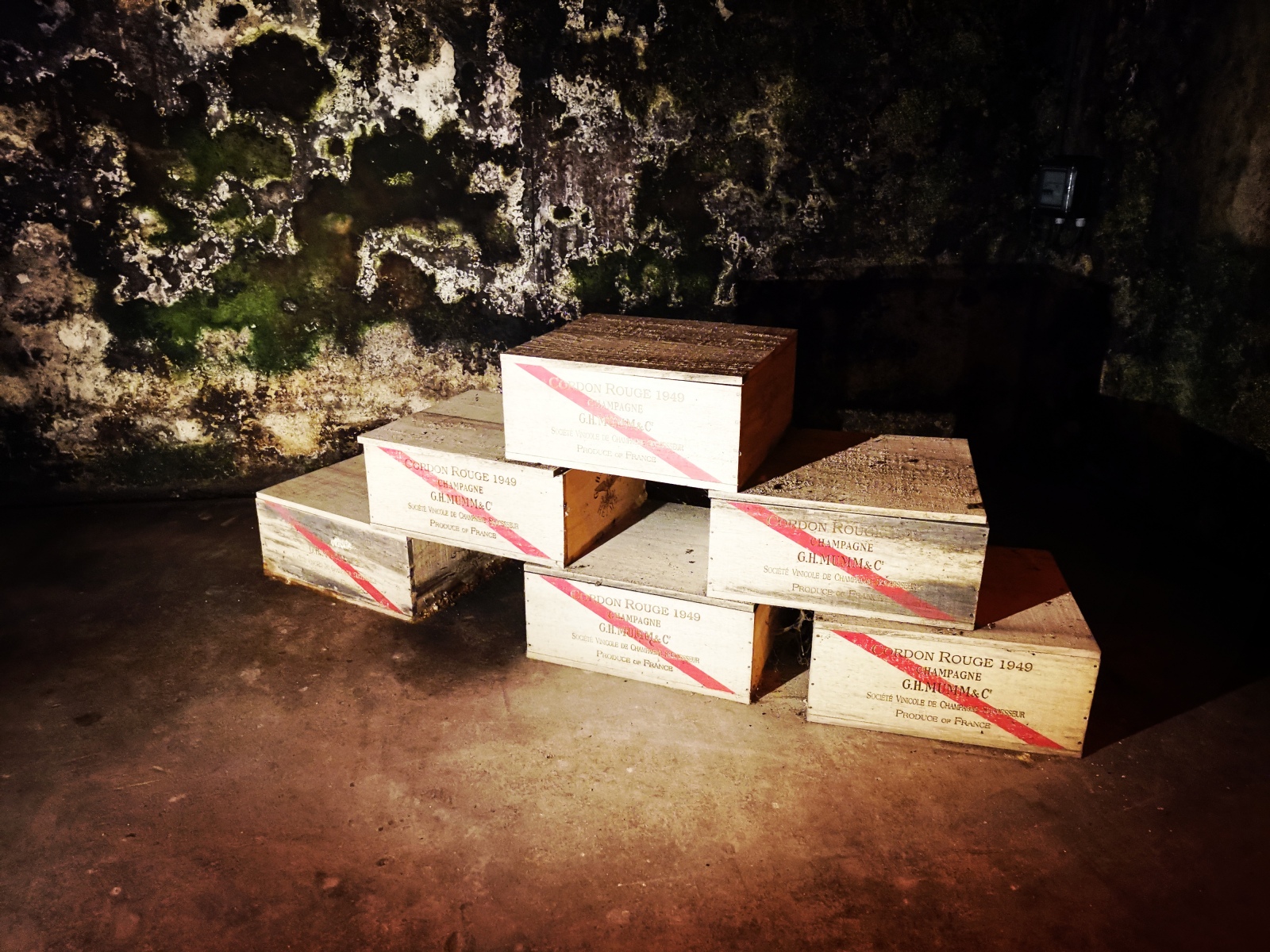 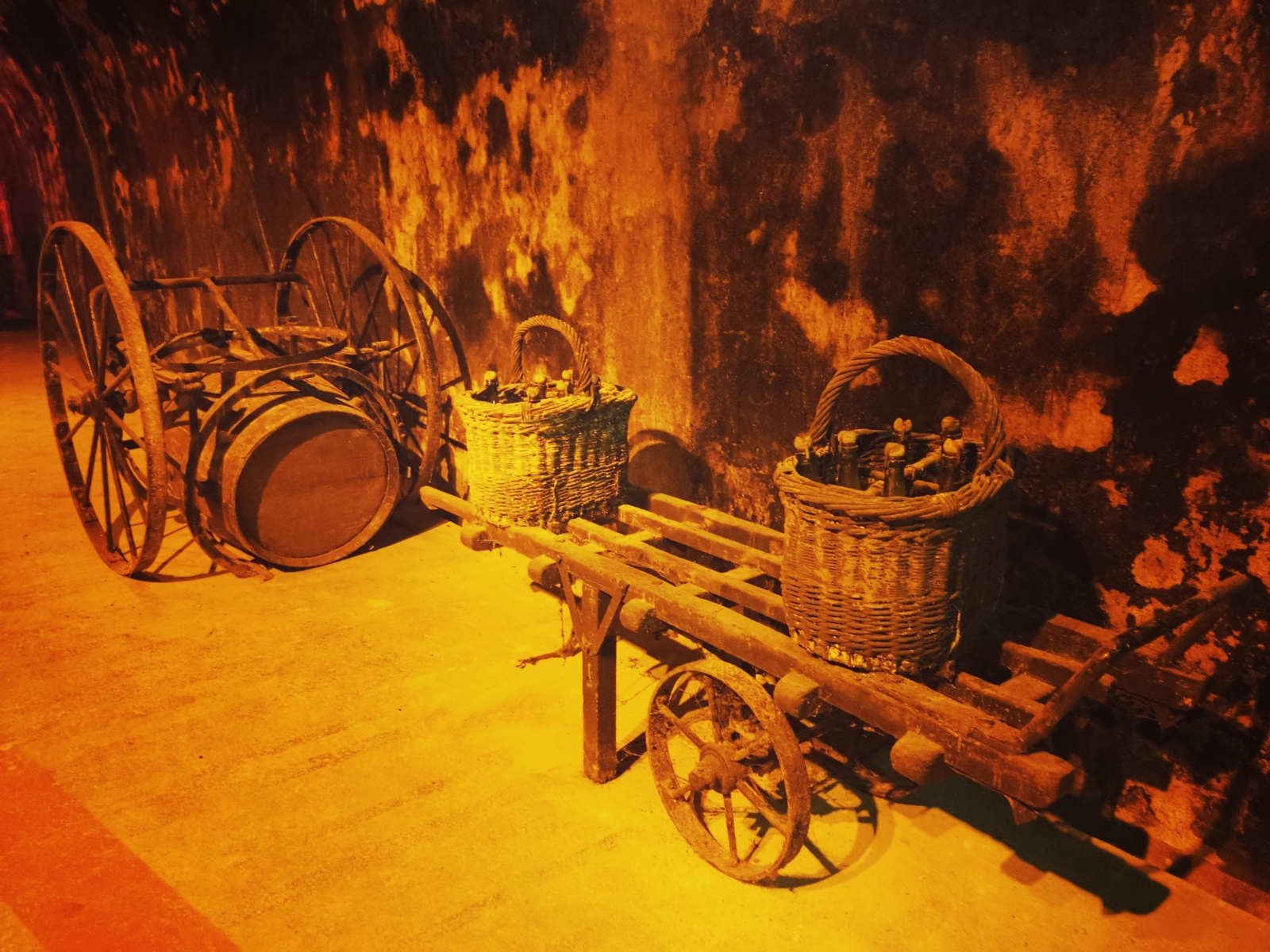 Still in the cellars, during your visit, you would pass in front of the Oenothèque, an oracle keeping all of the historical Mumm‘s vintage wines, allowing then oenologists to better understand the evolution of the wine. Not far away stands the 400 meter bottle conveyor. For the wink, the Jamaican king of 400 meters race, Usain Bolt was named as new ambassador of the late Cuvée Mumm.

Remembering that the beginning of a long history with the creation of the famous Cordon Rouge in 1876, which represents the true identity of the brand. It is a blend of 3 grape varieties: Pinot Meunier, Chardonnay and Pinot Noir. It was developed as a tribute to the French Légion d’Honneur award, a cuvée updated in 1996 under the Grand Cordon label.

Remember that this Champagne area is delimited to 34 000 hectares, on 5 sub-regions including Meunier (for fruity), Chardonnay (for the mineral), Pinot Noir (in the Montagne de Reims, grape variety of the structure and the character at wine), the Côte de Blancs (on a very calcareous soil).
These are spread over 320 villages, divided into 3 types of villages: the 42 villages 1er Crus, the 17 Grands Crus and the 261 other villages. In 1911, despite the heterogeneity of the vineyards, it was classified as either hillsides, often better irrigated, and valleys. So many grape varieties to discover at the end of your visit during the tasting time, at the boutique! 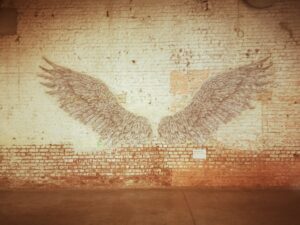 Around Lille full of delights, with La Laiterie by Édouard Chouteau and La Condition Publique curatored by Magda Danysz