Anyone who enters Caravaggio, is like embracing a religion, asceticism of the painting, power of the light which puts in relief the unspeakable, the unnameable, the impossibility of showing, but which is nevertheless offered to the eyes of the one who wants see: See exactly, this is what allows this incredible exhibition in Milan  (translated from French by Alexandre Plateaux). 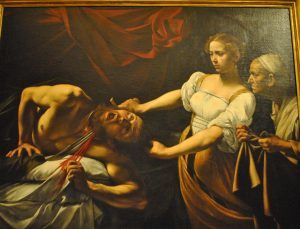 At the Palazzo Reale facing the Duomo and its stone needles imploring Heaven, a rare exhibition, full of restraints, takes place in a sober and powerful staging, to the Italian, one would be tempted to say. The curators of the exhibition managed the tour de force to gather about thirty works of the Master, coming not only from Rome, from Naples ((The Flagellation), from Florence (Young man bitten by a lizard, The Good adventure) , or Genoa (Ecce Homo), but also Barcelona (St. Jerome), London (Salome with the head of St. John the Baptist), and the United States, as Detroit (The Conversion of the Madeleine) or Hartford (Saint Francis in ecstasy, the first sacred work of the painter, which is known to us) … 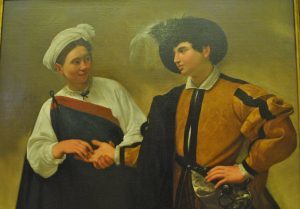 This dialogue between works, made possible thanks to Dentro Caravaggio, leads us to delve into the depths of the painter’s creation, in all its details, in a hand posed here, clumsy, poorly represented, shocking by the proximity of a face if realistic. From a thigh or an arm, with the perspective picked up, a shadow on a skin, too orange, a touch of white or a green highlighting the morbidity of the subject. 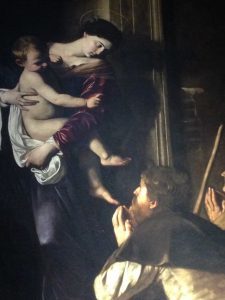 The Madonna of the Pilgrims / Photo Credits: Sylvie Roman

We go further, as if from Caravaggio everything was acceptable, forgivable: an arm that begins and disappears suddenly, as sliced, a totally improbable foot or a pose, as in the exceptional painting “The Madonna of the Pilgrims” (Rome) Exceptionally out of its frame and its altar of St. Augustine Basilica, Orbi, to carry The Word. The feet are dirty, twisted, the clothes removed and holes, the heads stale, suffering but waiting for redemption and hope for their proximity to the Virgin and he Banbino. The child worn improbably on the hip, is disproportionate, it is not an infant, it is already invested in his flesh and his gestures of a mission divine. 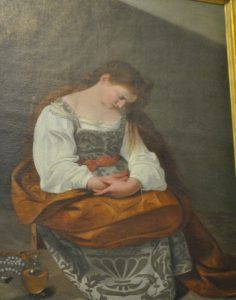 This apparent casualness in the poses of his subjects is a habit of Caravaggio, almost a mark, a sign. The pose of “La Madeleine repentante” is also disconcerting, with this elongated neck, extra vertebrae can we imagine. Sitting on a low stool, her body is disproportionate, legs can not exist, for lack of space, moreover, the dress is stencilled. This atypical pose but which is symptomatic of the painter, is found in the moving picture of “The Rest during the Flight into Egypt” (Rome, Galerie Pamphili). The Virgin offers her neck to the eyes, to the temptation of the flesh, but also to that of the executioner to come for his son. His hands rest, waiting, or meditation. The painting opens to a beyond, ultimate vanishing point before the future which is written yet. 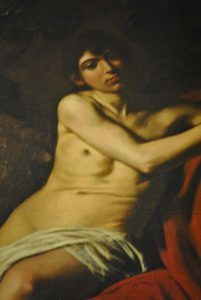 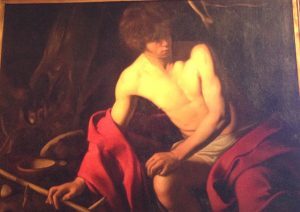 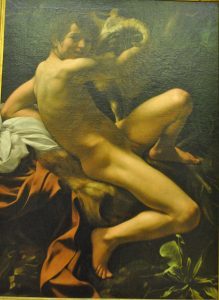 Fascination of these “Saint-Jean-Baptiste” exposed in a disconcerting proximity, they who are for the most part, separated since centuries in the mansions of their patrons … Obsession in front of these bodies revealed, almost naked, simply protected from our glances of voyeurs by a veil, a blood-red cloth, premonition of the Passion of Christ to come. The bodies are emaciated at Saint John the Baptist, a young man still frail at the beginning of his own spiritual search. In contrast to his muscular and tortuous workers with acrobatic poses revealing the jugular, the neck offered as Isaac-Lamb in front of the knife of the executioner, his own Father, or as of course, Holofernes who offers his neck after offering his body to Judith vengeful. He is here, exposed, at a good height, offered to our eyes as voyeurs, enjoying the pain of the other, and the definitive act. 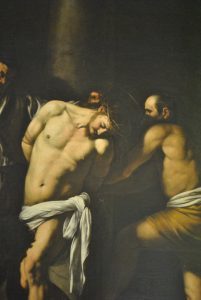 It does and does what no one will do, thankfully. It avenges a people, a woman, women, and this gushing blood lava of all future sins, like the blood that flows from the wounds of Christ in “Flagellation”.

Dentro Caravaggio, also makes us dive, and it is a step to greet, in the process of the Master: thanks to several techniques, most of the paintings exposed to the Palazzo Reale were the subject of investigations and researches. Repentances, changes of position, a character that disappears, a hand an arm positioned differently. Everything is there. And we enter literally and in fact, in the process of creating the artist. While the specialists have always said that Caravaggio did not make preparatory drawings, that he put the color directly on the canvas, the proof is made that the painter incised his paintings, after the first preparatory layer, and posed his characters, the building against each other. The complementary keys are also visible, and suddenly, the eye is more piercing, analyzing the better the paintings exposed to the eyes. Especially since their walls, their altars, accessible only a few centimeters, can be better observed at leisure and impregnated. This does not replace, of course, their discovery in the boxes for which they were invented.

The sobriety of the staging, the educational components, the richness and rarity of the paintings, make it an exhibition to see absolutely. 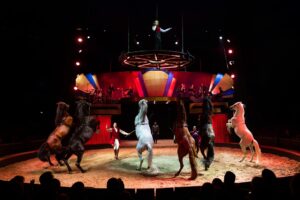 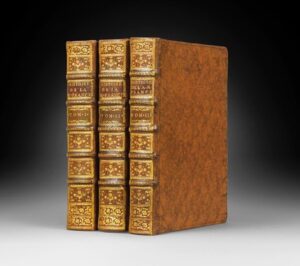