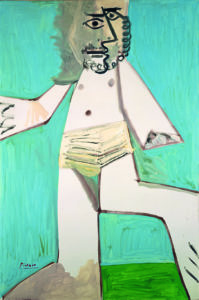 While the winter frost was still felt, Marseille relies on Pablo Picasso to warm up and sunbathe his days. Picasso, the Voyages Imaginaires act proposes an initiatory walk, throughout the imagination and the curiosities of Picasso, throughout its flourishing creation (from 1901 to 1969), highlighting a series of his favorite inspirations (photo credits: Sylvie Roman).

Two showcases for a trip
Designed and co-produced in partnership by the city of Marseille and the Reunion of the National Museums and the Grand Palais, this first flagship Provence exhibition, of the 2018 year, is spread over two exceptional sites, antagonistic yet but complementary, the Centre de la Vieille Charité and the Mucem. The 18th and 21st century finally both connected to travelers and a little further, the former hospice, situated in this French port city, where the needy patients came from all horizons, the other modern concrete totem placed on a jetty, at the water’s edge.

Logically, for an exhilarating exhibition about the dreamed, fantasized, or real journeys of a major 20th century creator. The journey in La Vieille Charité, offers an immersion in the creation of the young Pablo, before becoming Picasso, followed by his years of study and observation notably of the acrobats, artists… Then, came his “Bohème bleue” period, some of his elements come from the Edinburgh National Galleries (Pablo Picasso / Homme debout / 19th september 1969 / oil on canvas / 194.7 x 130 cm / Baden-Baden, Museum Frieder Burda © Picasso‘s succession 2018).

Furthermore, the Africa Ghost allows to discover an important correspondence with his relatives and friends, but above all, many sculptures could have been exposed (Musée National Picasso, Paris), along other African masks and reliquaries, but also famous proper designs, from the cubist and primitivist‘s Picasso era (including those Studies about the Three Women, from the Chchukin Collection)…

A journey in Provence

Deeper in this act, we still dive into his Southern years, starring Braque, through Marseille, Sorgues and Aix, at the foot of the Sainte-Victoire, thanks to letters, postcards, sketches, watercolor drawings, feathers, ink stamps and paintings exchanged. The journey, or rather the travels continued in its deconstructed creation, emanating from the 50s and 60s, as hymns to youth and fire, plus fantasized and imagined women (we may count the Naked woman with the Turkish bonnet, The Women of Algiers, The Abduction of Sabines…), still the same women’s thematics in fact.

Finally, we may have pursued in the core of the Mucem, like a stranded boat anchored on the endless Marseille‘s docks, surrounded by the blue flows of the Mediterranean Sea, so precious and inspiring to the Spanish painter. This work was the result of his contribution for different sets of Russian ballets with Serge Diaghilev, including Parade (1917), Tricorne (1919), Pulcinella (1920) or Cuadro Flamenco (1921)…

On top of that, Picasso was also a costumer and decorator, for these shows, even making several trips to Naples, in order to study the masks and tradition of the legendary Comedia del Arte. He also established many collaborations with Italian painters from the futurist movement, such as Depero, whose influence is clearly undeniable. There are more than 430 pieces from the artist, such as his epistolary exchanges, notebooks, costumes, masks visible in the collections, inviting us, in a simple way, to stimulate our own imagination to guess how it happened then.

At the Old Charity and the Mucem, Marseille