Located at number 34 of the historical rue de Bourgogne, behind the French National Assembly in Paris, we invite you to discover a new unmissable Parisian culinary address. Indeed, replacing the old Savarin and here renamed L’Archestrate, after the original and emblematic name in the gastronomic world of the former Michelin-starred restaurant of Chef Alain Senderens. This enigmatic Greek name was thus able to rise from its ashes, in particular thanks to the initiative of several women. Indeed, the entrepreneur Agathe Vaissière, who already manages the restaurant Le 122, wanted to establish a more confidential appendage of the latter mentioned place, by taking over this small establishment with 25 seats spread over two floors. Distributed by an elegant period staircase with incredible charm, this place with incredible charm is a tribute to the antique Greek gastronome Archestrate from Gela, a fervent traveler is best known for being the author of one of the oldest cookbooks, simply entitled “La Gastronomie”. By AP

De facto, nestled in a bright space, thanks to large bay windows, echoing a variation of colors around yellow and blue tones, this restaurant offers a kitchen open to the street. Once inside, take a seat around one of the marble tables, in one of these seats of different shapes and materials, comforted by a background small vintage wooden bar. Upstairs, you can admire a small room with the same spirit of 50s style, this joint space can thus accommodate random privatizations (photo credits: AP).

Knowing that travel around Greece and the Mediterranean areas are constant sources of inspiration for the team of this new kind of restaurant, its sensory identity for this inn has thus been entrusted to Shirley Duthilleux. 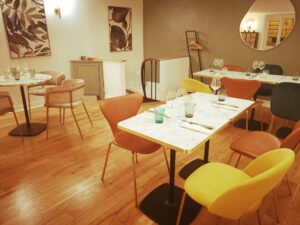 At the age of 24, this young chef is particularly known for her participation in the TV program “Objectif Top Chef” and has also studied in prestigious establishments, such as the Cheval Blanc and the no less famous Table de l’Espadon, at the Palace Le Ritz. Claiming a certain freedom of creation, this esthete of taste aims to cook as much as possible local products, and to innovate around forms and original aromatic accords.

This philosophy has been made possible since its arrival in July 2022, thanks in part to the search for new taste sensations, through the use of spices, honey, coffee and different types of pepper, while taking the choice of abandon certain traditional structures. 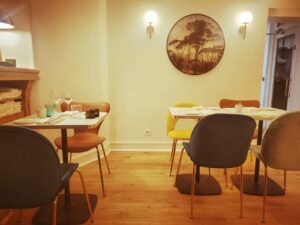 A set of raw materials that revisits, in a way, the precepts quoted in the recipes of another illustrious gastronome Brillat-Savarin, directly influenced by the century of Pericles. This is why, while browsing this appetizing menu, which varies according to the seasons and the Chef‘s inspiration, you would have the pleasure of discovering an à la carte choice or a surprise menu, as a concentrate of some of these dishes, brought together in a 3-course proposal for lunch or 5 sequences during a dinner.

The icing on the cake, for 20 euros more, let yourself be guided for a food and wine pairing, through three glasses of wine which will associate the different dishes of these two formulas. 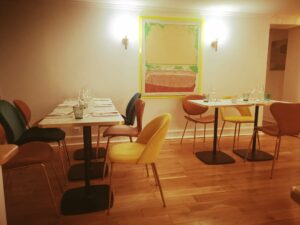 As far as we are concerned, we had the proposal of a tasty and mineral Viognier called Les Ruisseaux from Domaine Jean-Claude Marsanne, an elixir that went perfectly with our winter composition.

It is clear that a hint of talent and dazzle were there, since our surprise appetizer, with an alloy around gingerbread and orange condiments, trout gravlax and salicornia. Before, engaging with a variation around wild mushrooms (starring ceps in particular), topped with a celery puree infused with Ethiopian coffee, topped off with a chanterelle condiment, small shoots of Tahoon Cress small shoot, and all well sure sprinkled with coffee. 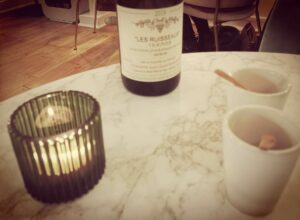 Unless you prefer to opt for a new interpretation of the Œuf Parfait, in an organic version this time, embellished with corn and roasted hazelnuts, all hydrated with a fresh clementine juice.

Then, let your senses buds warm up with the first step of your Terra e Mare accord of your formula in 5 sequences, carried by scallops, enhanced with a creamy Jerusalem artichoke, softened by blackcurrant condiment and shavings of chestnut. 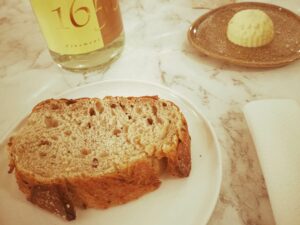 The intercurrence resides in a roast veal was cooked in butter à la minute, sprinkled with mini parsnips, along Cress Herbs as fresh as they are tangy, without forgetting pointed cabbage leaves drowned in a glaze.
In another hand, on the menu, an alternative can also be tempted with three pieces of free-range poultry cooked at low temperature for 1 hour, beet puree with sherry vinegar and enhanced by the crunch from chicken skin crisps and pomegranate seeds. 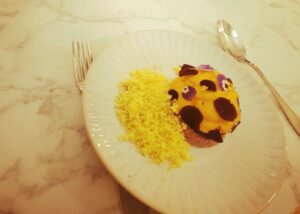 On top of that, you wouldn’t be allowed to leave the premises if you don’t taste the incredible artwork initiated around Comté shavings, matured for 24 months, melted and floating on a smooth marmalade of fruits, young Comté mousse and nut. Last but not least, a selection of desserts is also up for grabs, via another interpretation of an Araguani chocolate variety made Merveilleux, unveiling a crunchy biscuit, and its whipped dark chocolate and peanut ganache.